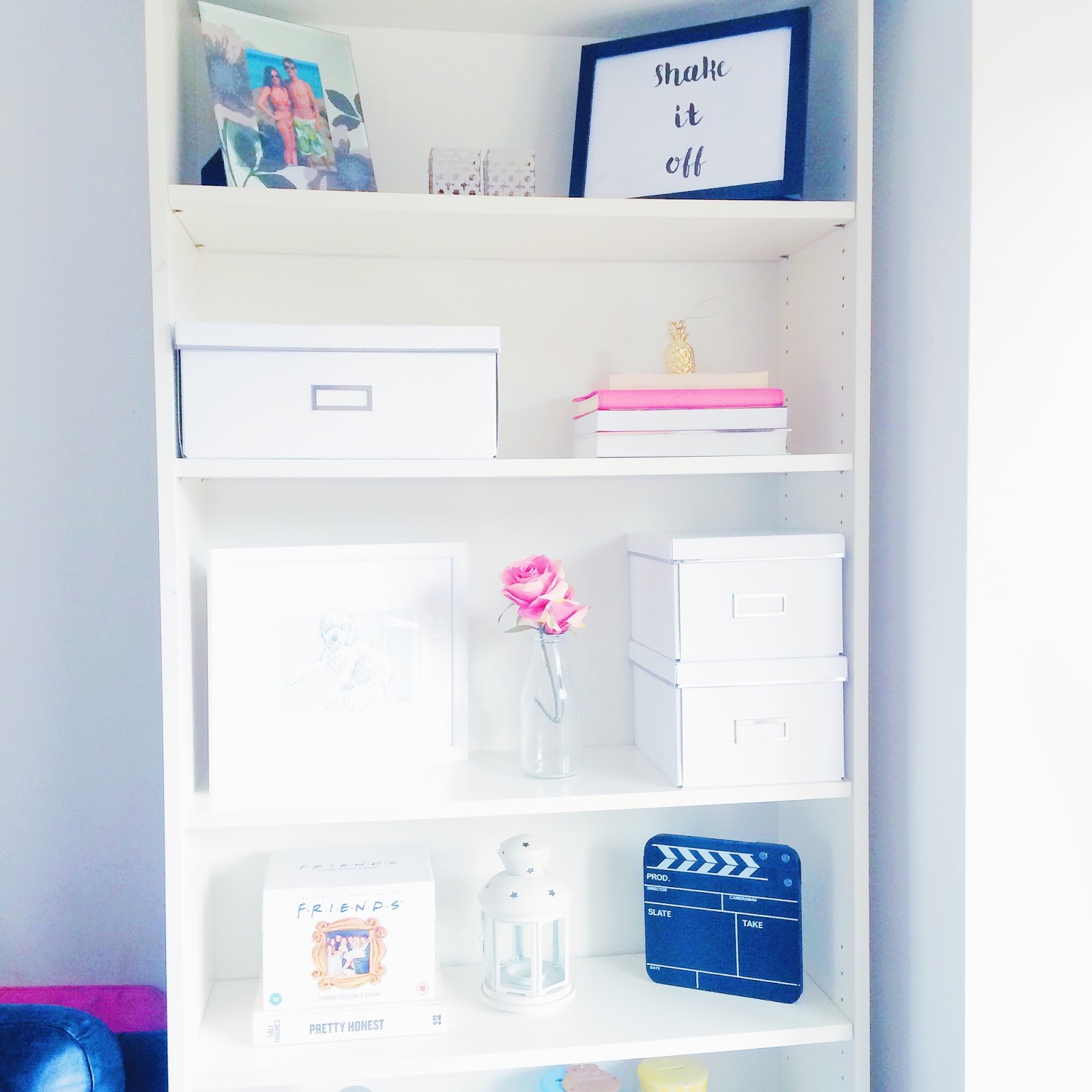 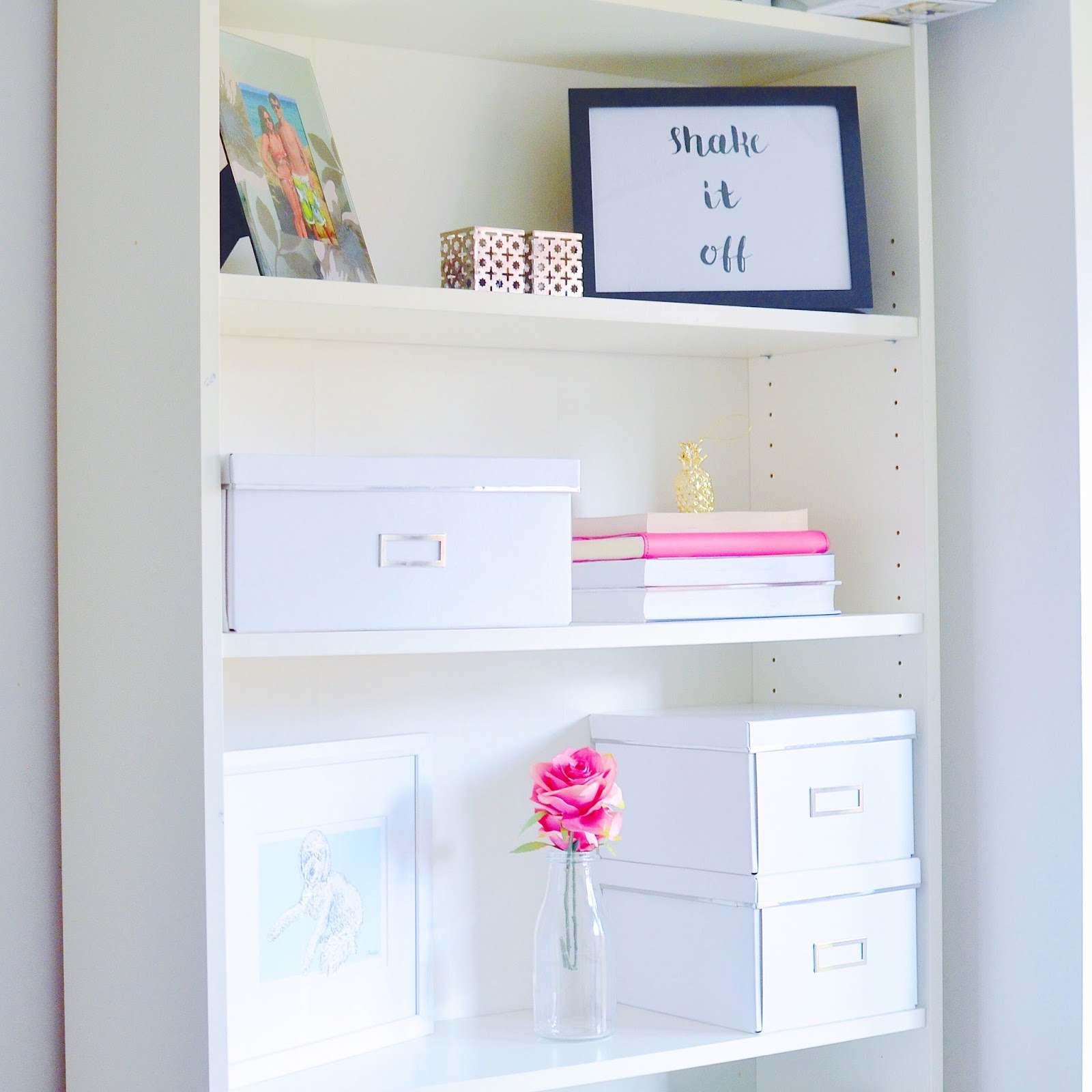 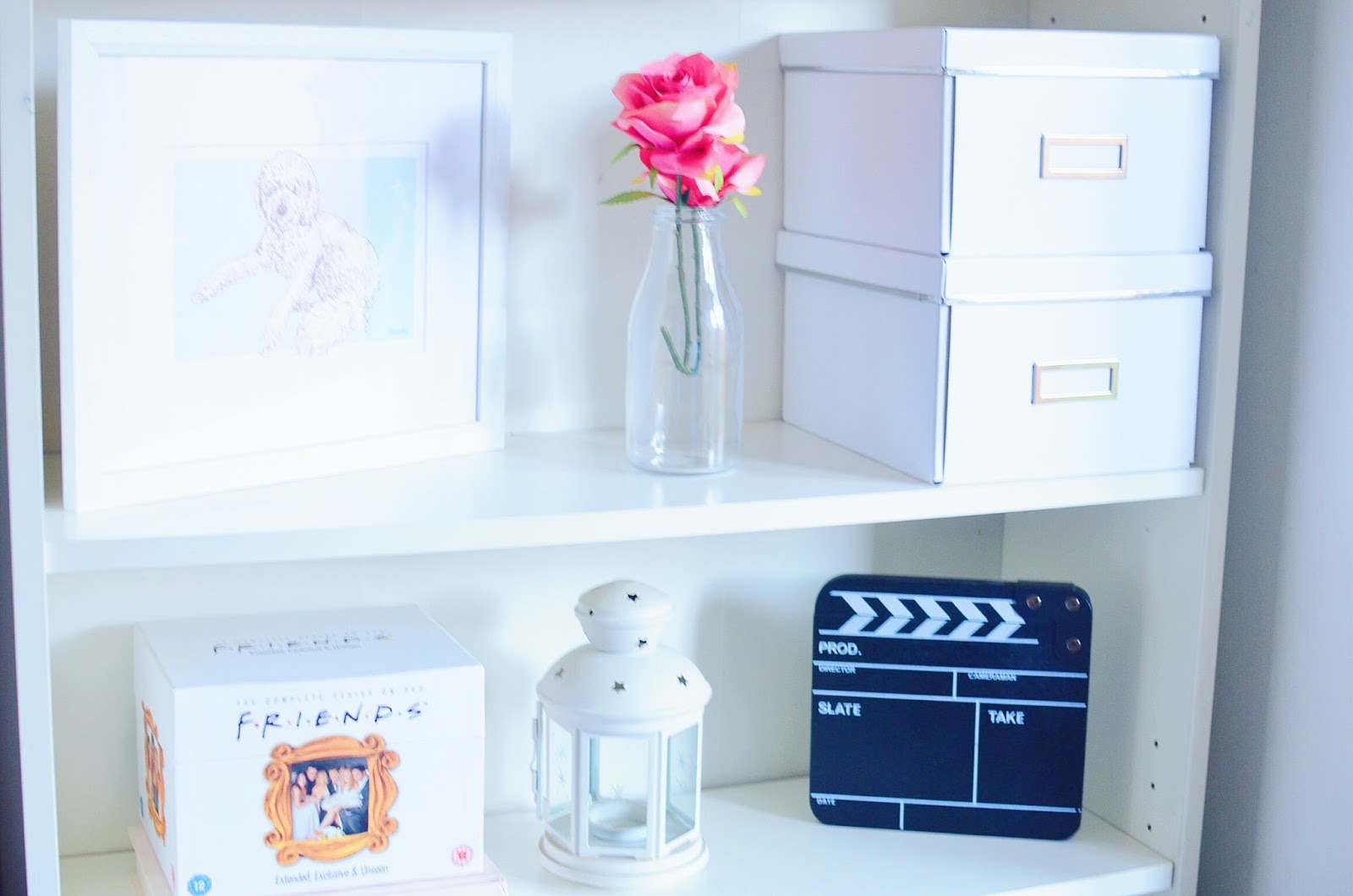 Yes that is a post title that I never thought I would write, but here we are, and today’s post is exactly what you think it is… how to style a bookshelf. I know right, could I become more middle aged if I tried? Probably not.. unless I suddenly start driving round in a Volvo or something.

Anyway.. do you have that one or in my case *several* jobs around the house that you want to get done at some point? From clearing out the wardrobe, to the cupboard under the stairs, to sorting out that bookshelf. The kind of jobs that you can put off cause they’re not essential and they’re the kind of jobs that will take you several hours. Yeah those.

Truth be told, I have been putting off sorting out the bookshelf for a good year. Possibly even longer. We used our bookshelf well for books. I mean that’s why it’s called a book shelf right? Well not according to the likes of Pinterest and to be honest, I realised that our bookshelf was a bloody mess. Cause our house is teeny tiny, I mean I’m sure our living room was made for The Borrowers, the bookshelf made everything else look messy cause it took up so much space.

The thing was, I wanted inspiration. I’m not some Lawrence Lewllen Bowen who can just work out where things go and they look fabulous, oh no. So I was looking for the right inspiration and working out how to exactly ‘style’ the bookshelf.

I found this picture on Pinterest which ignited my inspiration. I realised that easily, I could recreate something like this and also being a keen Ikea fan, I knew those white boxes wouldn’t cost too much. I have to say though, I am from the family who used to take day trips to Ikea- let’s just take a minute here, what’s not to like about free pencils, meatballs and pretending the rooms are where you live? Heck I still enjoy all that now and I’m 24.

So I went to Ikea, and bought myself three boxes, cause I wasn’t very organised, I didn’t know how many boxes I’d need so grabbed one big box and two smaller boxes. The larger box was £1.25 and the smaller ones were 90p. Yep that’s right… SOMEBODY CALL BARGAIN HUNT CAUSE I’VE FOUND ONE.

Anyways, I came home and got to work. I totally should of been doing work, but you know when the inspiration hits to do these jobs, you have to run with it and leave everything else behind.

So first of all, I had to sort everything out. I decided that the dvd’s and Xbox games could go in the drawers under our TV. So I sorted out these drawers which to be honest were just full of crap. Stuff that we’d shoved under there to make the place look more tidy. I basically threw most of it out and soon had three clear drawers to put all the dvd’s and games in. I managed to get the majority in there and was only left with a few which I popped in the bigger box that I got from Ikea.

Then I had to tackle the books. I sorted through which ones we actually wanted. I won’t lie, the unauthorised biography of Cheryl from 2009 did not make the cut. Soz chez. 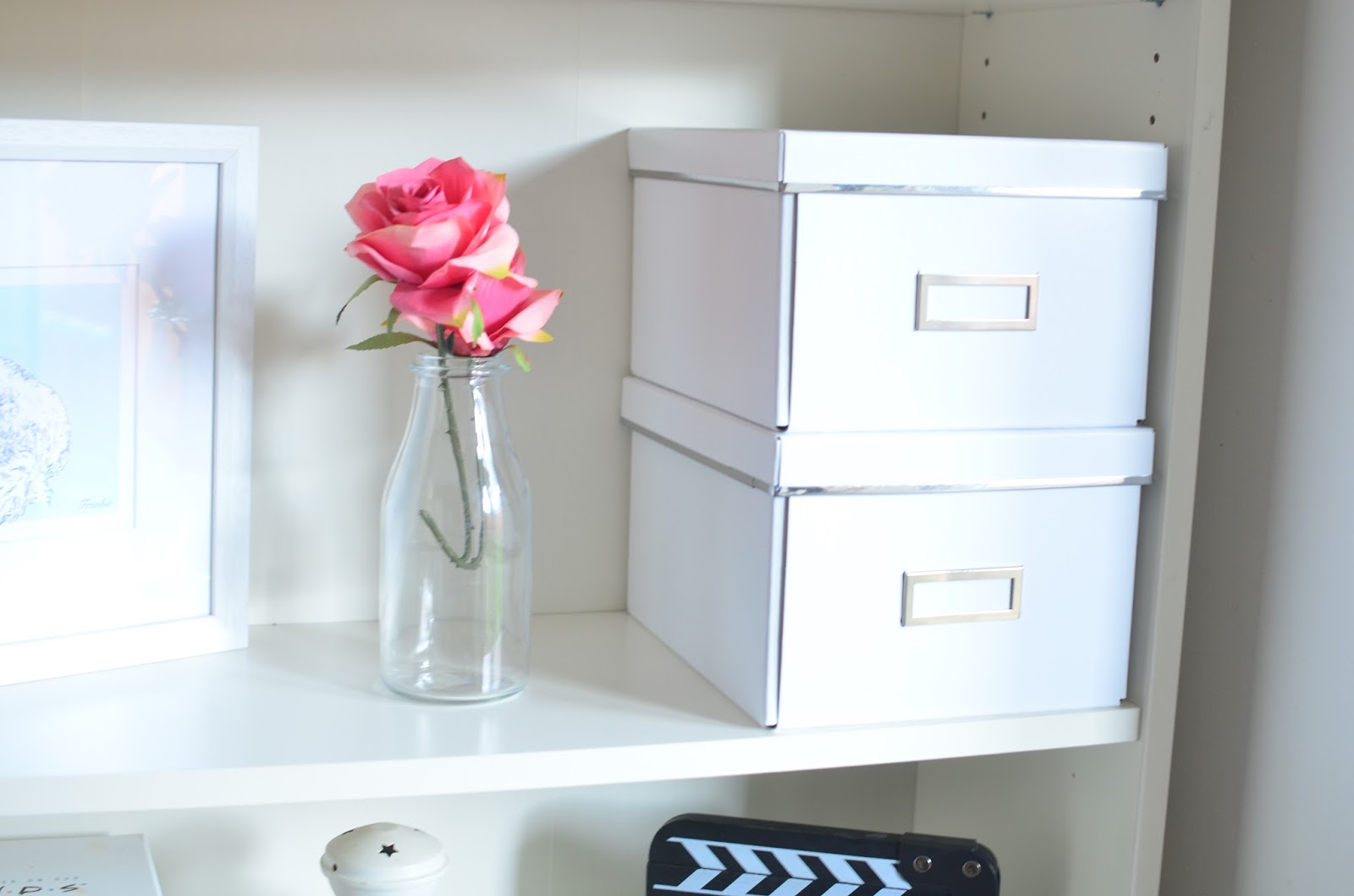 Then once these had been sorted out, I got to sorting them out into little piles. Now we aren’t the biggest book readers, well I lie, I do love reading, but I do have a kindle so I’m not really a book keeper. I do have one Twilight book though, part of me wasn’t sure what to do with.. so I felt I had to keep it. Maybe next year, I can say goodbye to the vampires.

I’d seen on Pinterest, this trend of turning the books around so you see their pages instead of their spines. So technically you can have really embarrassing books on your bookshelf and no one would ever know. You know, I could of gotten away with keeping that unauthorised cheryl biography and no one would ever of known. Damn.

So on this shelf, I added a bright pink notepad into one pile of books, to add a bit of colour cause y’know I’m a bit zany like that. I popped the large Ikea box next to this and then I added this cute little pineapple decoration that I had lying around which I loved but wasn’t sure where to put previously. So I popped it on top of the pile of books and it genuinely looked like it had found it’s calling in life. 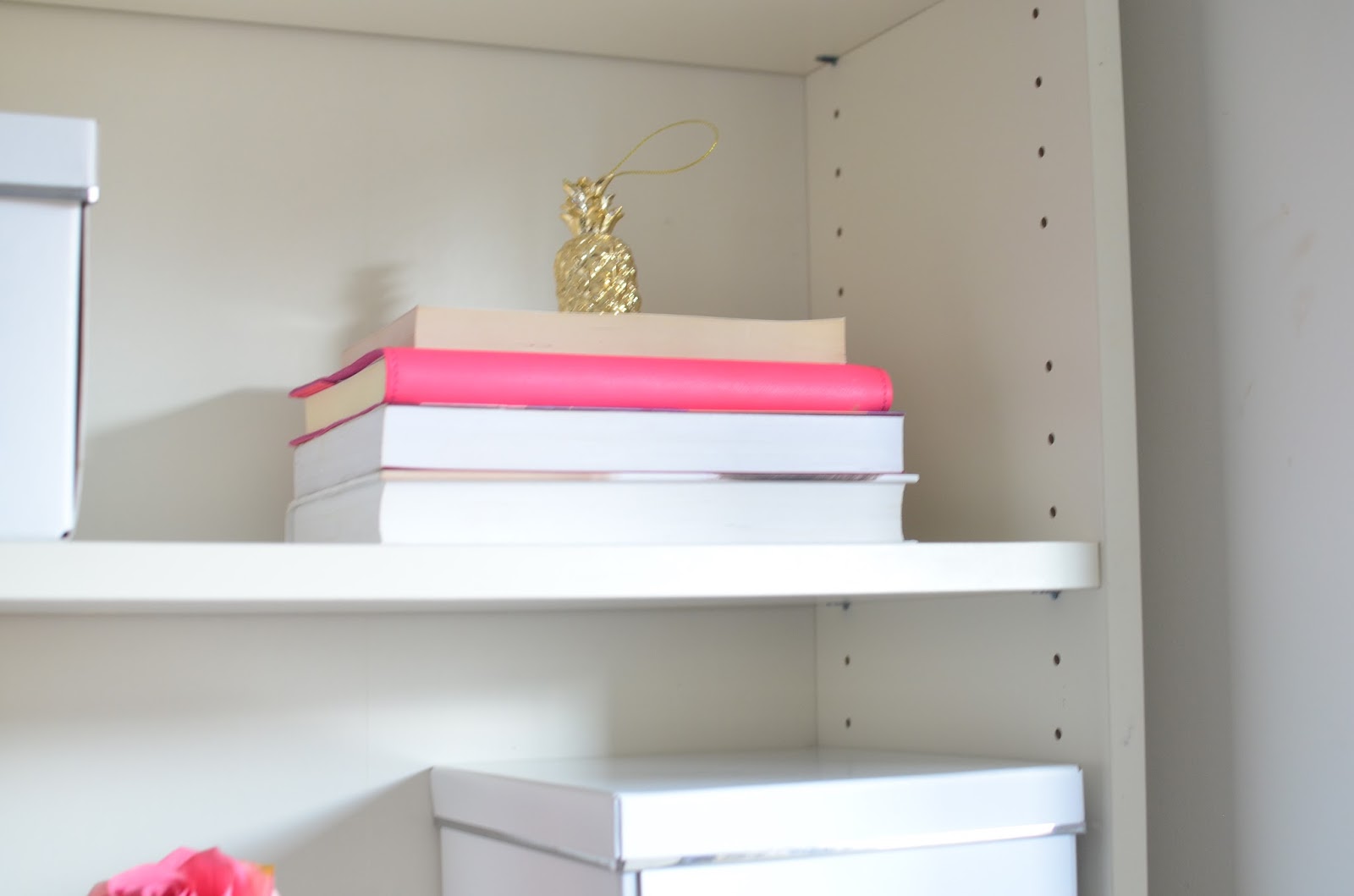 Okay it’s so cliche blogger- pineapple and gold but whatevz, I have found a home for it.

Then on the next shelf, I put the two smaller  boxes on top of each other and put a vase from ikea that I already had next to them, with a couple of fake roses that I had in my blogging room. This added again another little bit of colour and then I added this cute print of Frank that Not On The High Street very kindly sent me and again didn’t have a home previously. The white frame and pastel colours tie in really well together with my colour scheme, and hopefully I don’t look too much like a crazy dog lady for having a print of my dog. I totally look like a crazy dog lady don’t i?

Then for the rest of the shelves, I just utilised whatever accessories I had lying around the house, such as a white lantern from Ikea that I had, a movie clicker board which I thought looked quite cool and a picture frame here and there.

Finally I wanted to add a print of some sorts, but instead of forking out on one, I decided to make one myself. All I did was head to PicMonkey where I used a font which I had downloaded from DaFont (movus brush hand if you’re wondering) and then wrote a quote and printed it out on some card. Then I put this in my frame of choice and voila. I saved myself money from getting a print printed and I can change it up as much as I want. I only used ‘Shake It Off’ cause it was literally the only thing I could think of. But yeah. Can’t beat a bit of Taylor can you? 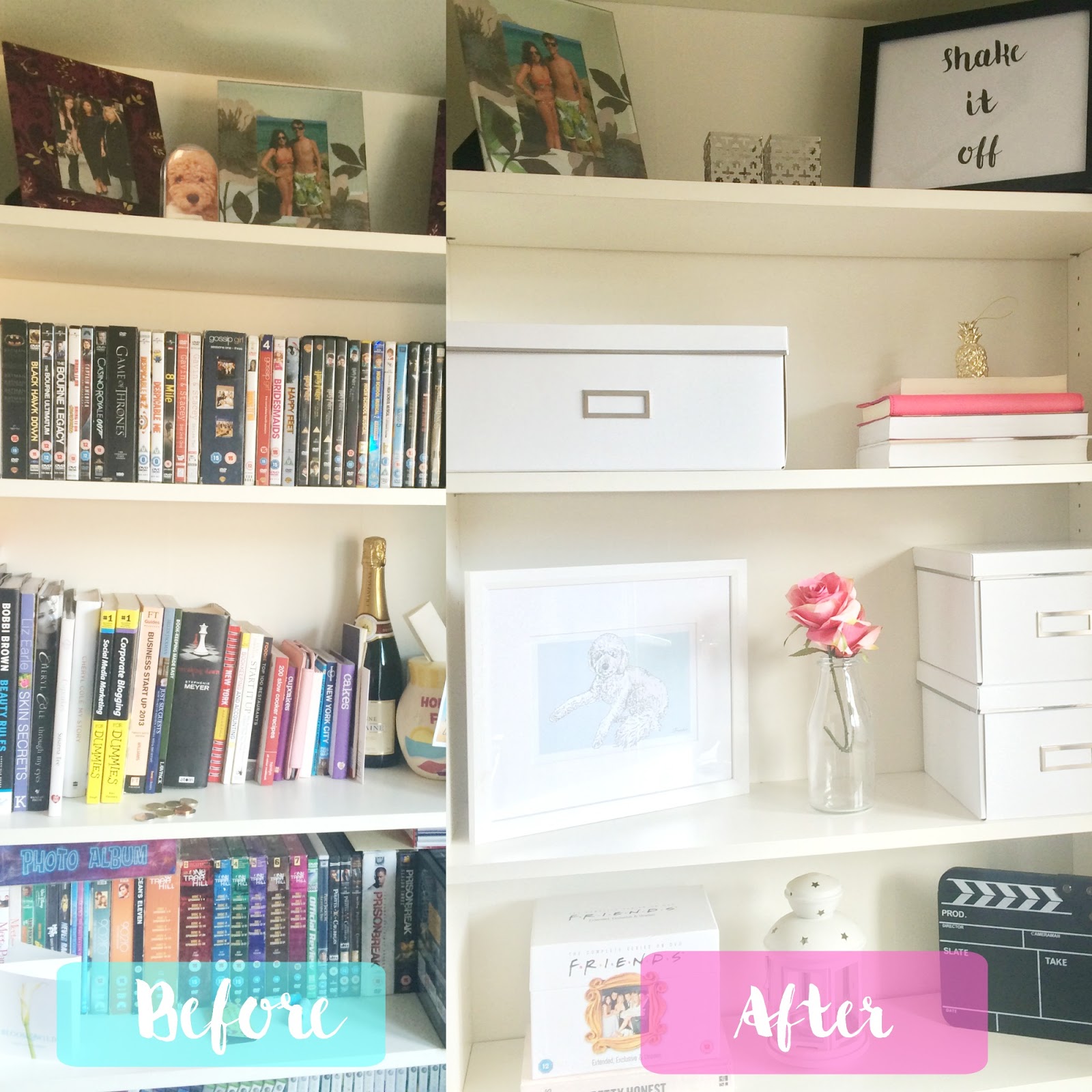 And that is my bookshelf. It’s kind of weird to think of what it looked like before. It looks so much tidier now and I feel it makes the room more put together and stylised now. I keep looking at it and thinking to myself ‘good job!’ Although I will probably change some things around in the future, for the time being it looks a 100x better than it did before, so next I will probably turn my attention to another one of those jobs… maybe finally clearing out my wardrobe?

So that’s my bookshelf. I literally can’t believe I’ve just written such a long ass post about my bloody bookshelf. Ha.

Well i hope you enjoyed it anyways and if you’re thinking about sorting out your bookshelf soon, I would totally recommend it 🙂 right I’m off to stop blabbering and continue looking on Pinterest for more inspiration!

Win Brownie Points With Jack Wills
Realising No One Is Perfect. 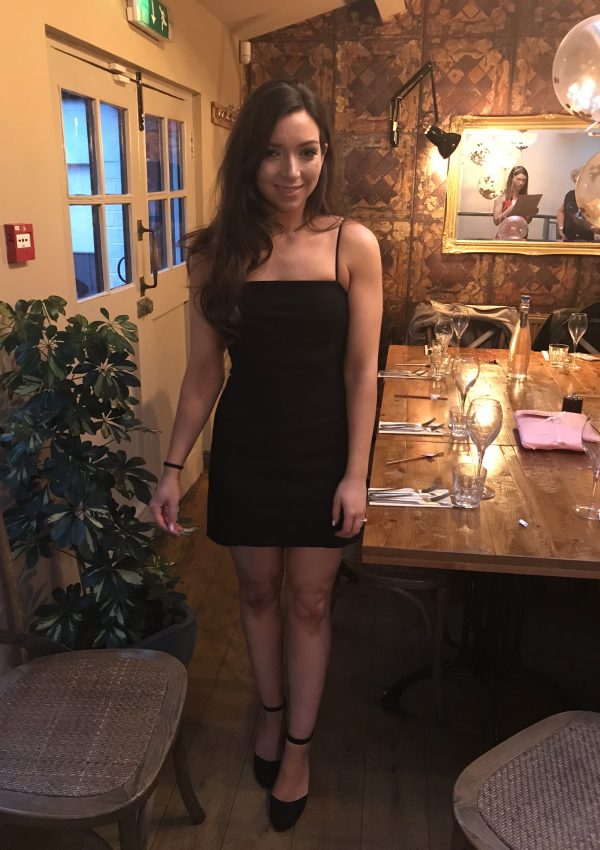 Why I Want To Change My Relationship With My Skin #faceforward