Being the true girlie girl that I am, I love glitter and the colour pink especially when the two are combined in a nail polish form. So you can imagine I was in there like swimwear when I saw this nail polish in Topshop called Adrenalin, a pink glittery polish that I just couldn’t leave on the stand. I think this is a relatively new polish to Topshop’s make up range (which I cannot recommend enough by the way) and there were quite a few girls gathered round the stand cooing over it’s pink glitteryness.

Like a true magpie this was soon mine and as soon as I was home I was layering it over a pastel pink and found myself having nails that Barbie would be proud off. Adrenalin is not your average glitter polish it has large flecks and small flecks of glitter think OPI’s Rainbow Connection but all the same colour of glitter, which I was disappointed to see was a silvery colour and no hint of a pink glitter which the bottle makes it out to be. That being said I do love this polish and loved the effect it gave on my nails, this could be layered up on it’s own or used as a top coat as I did. I found that my polish lasted really well underneath it and I couldn’t stop admiring my nails, yes a little bit tacky and a little like Barbie vomited on my nails (cause that’s what I’d imagine Barbie’s sick to be like!) But what girl doesn’t like a little Barbie in their life now and then? 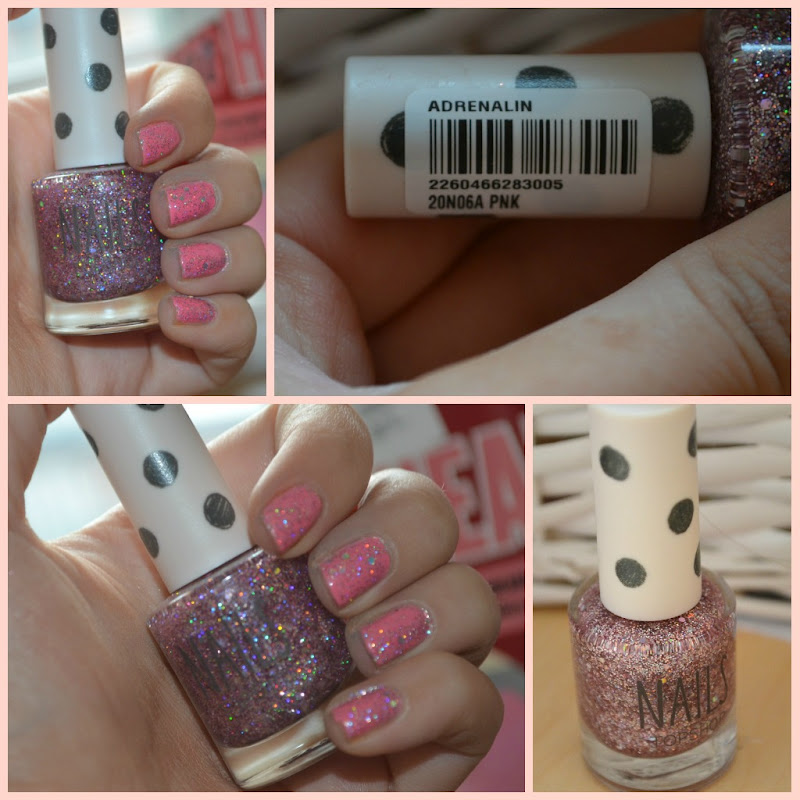 Adrenalin is £6.00 and £5.40 with student discount which when you think about is quite pricey for a drugstore nail polish, but I would recommend this polish as I haven’t seen a drugstore glitter polish like this with the different flecks of glitter. I will have to try it on it’s own to see if there is any hint of pink glitter, but if there is it’s a very subtle pink! Adrenalin isn’t online but the silver version Ice Crush is (link) so check your local Topshop if this floats your boat 🙂

I hope you’ve all had a great Tuesday, I’m off to watch 90210 and catch up with last night’s Gossip Girl 🙂 hope you all have a lovely evening!

Lush Halloween 2014
Growing Up In The 00’s
Desk Essentials